We here in Nova Scotia call it the “Eastern Shore”. The rugged eastern Atlantic Coast of Nova Scotia between Halifax and Cape Breton is one of the few accessible areas of ocean coastline remaining in North America. With barely a traffic light for the entire tour, we will enjoy a week of quiet coves, marshes, islands, and sandy beaches.

The unique feature of this tour is that this coast is perhaps the most quiet stretch of coastline on the eastern coast of North America.  It is not built up, with many long, barren, pristine stretches along the Atlantic Ocean.Once out of out starting point of Halifax there will not be a traffic light until the very end of the tour. No community in between reaches 1,000 people. The Eastern Shore features one hundred coastal islands.  The coast offers quiet white sand beaches, sheltered coves, dramatic windswept headlands, boreal forests, bogs and barrens, as well as a rich diversity of seabirds, and sea mammals.

With its low population, villages are scattered. Infrequent facilities require this tour to have wildly varying highs and lows in daily distance.  Where we can we will also offer extra options along the way for more cycling.  There will also be hikes, beaches, historic sites, and other diversions along the way. 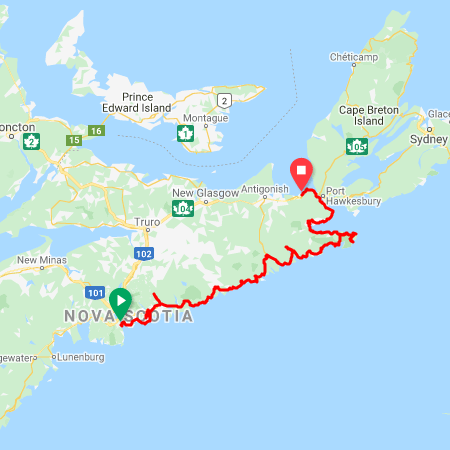 Day 1 – Halifax to Porter’s Lake 59 km (37 mi.)
We begin in Halifax with a reception breakfast. Since we will not have an early start our first day will have a moderate length day. We are planning a route using a multi-purpose trail to avoid traffic getting out of the city. On the way we will follow salt marshes with many bird species and have at least three great sandy beaches.

Day 2 – Porter’s Lake to Lake Charlotte 66 km (41 mi.)
The suburban watershed now gives way to sparsely populated coastline. We will enjoy undisturbed cycling for several days.  We will have a ride up and down on the Musquodoboit Trailway, one of the best trail systems in Nova Scotia.  A scenic former railway, it is now a well groomed pathway to backcountry wilderness

Day 3 – Lake Charlotte to Sheet Harbour 64 km (39 mi.)
A longer option passes through Clam Harbour, home of Nova Scotia’s annual sand castle building event.  Sheet Harbour is the largest community on the Eastern Shore. With about 1,000 people, it will feel gigantic after two days of quiet bays and beaches. There will be an option to explore Taylor Head Provincial Park. Michael Haynes, Nova Scotia’s hiking guru, calls Taylor Head his favourite trail. The closest trail is not a hard walk, should be okay for most. There is also a beautiful sandy beach and several hiking trails. There are many interesting geological features and natural habitats.

Day 4 – Sheet Harbour to Sherbrooke 82 km (51 mi.)
Hundreds of small islands dot the coastline between Sheet Harbour and Sherbrooke. The islands that make up this long archipelago are the exposed tips of “Eastern Shore drumlins”, formed during the last Ice Age. Sherbrooke dates back to the time when it boomed with a local gold rush. There is a large section of the village now acting as a museum.

Day 5 – Sherbrooke to Stormont 58 km (36 mi.)
Today with 58 km, it will allow a few hours to explore historic Sherbrooke Village before leaving. Taking an entire section of the original town, it is the largest museum in Nova Scotia. Port Bickerton is the only community of any size. It has Lighthouse Beach Park, our break area. The park is home to two lighthouses. An interpretive centre offers information on all of Nova Scotia’s lighthouses. We stay far up the 16 kilometre-long Country Harbour. A ferry connects us to Route 316 and one of the most undisturbed sections of coastline in all Nova Scotia. Our camp ground is situated on an island connected by a short causeway giving lovely views of the water and hills. There is nothing for long distances from here and the night skies are extremely clear.

Day 6 – Stormont to Fox Island 87 km (54 mi.)
We follow Country Harbour back to the Atlantic Ocean. Once a busy gold-mining area, the communities are now quite small and linger on among rocky coves. We end the day near the Canso Coastal Barrens. Our longest day, and also the most elevation gain.  Our reward will be one of the best camps of the trips at day’s end.

Day 7 – Fox Island to Boylston 45 or 65 km (27 or 39 mi.)
Chedabucto Bay offers coastal vistas, and fishing communities. The main stop of the day is the village of Guysborough. The county seat of immense Guysborough County, its history goes back to the 1600’s. There is an attractive waterfront and a trail that can be cycled across the Salmon River.

A side trip can me made out and back to Canso. The town is of national historic importance because it was one of only two British settlements in Nova Scotia prior to the establishment of Halifax (1749). Canso played a key role in the defeat of Louisbourg. Another side trip can be made to Little Dover, and its beautiful Black Duck Cove Provincial Park. If wanted, as option extra riding can pump up the day to 80 km (50 mi.)

Day 8 – Boylston to Port Hawkesbury 72 km (44 mi.)
With Cape Breton island coming into view, we round the end of the Nova Scotia mainland. After crossing the causeway onto the island, we end our coastal excursion. We will stay overnight at Port Hawkesbury and socialize together through our last evening.

Day 9 – Return Transportation to Halifax
A shuttle will be organized back to the our start point at Halifax.

What We Provide:
–Comprehensive ride guide; all about what you will experience on route, history, culture, trivia -camping facilities -luggage transfer; we will carry your gear, just bike and enjoy the ride! -bike mechanic assistance -sag wagon service –support vehicle available for breakdowns or drives to shorten your day -daily route maps -tour escort; Gary Conrod will be along the route, he has 190,000 kilometres cycling experience including most of it riding in his home province of Nova Scotia; –return bus and bicycle transportation from tour end point to Halifax..

All in all a tremendous cycling experience and an impressive feat of organization by Gary Conrod and his helpful staff at Atlantic Canada Cycling.

We signed up for the July PEI tour and are really looking forward to visiting PEI! We did the ACC tour of Cape Breton Island a dozen or so years ago and loved it. ACC provides a quality tour at a reasonable price. See you all in July.

Thanks for another fantastic and memorable trip. You guys do a great job.

The Newfoundland trip has a little bit of everything – hills, flats, riding along the ocean, riding in Tundra and some good hiking. Along the way we were able to catch a glimpse at whales, and even saw icebergs! Newfoundland is a remote area of Canada, and you get to experience great open spaces;, which also means limited services to some extent. There is never a day without something along the way, but you definitely realize that you are removed from the congested city life. The trip is well planned out, and the cycling nicely spread out over the ten days. The longest day of the trip is not overly challenging – unless Mother Nature has her way. Last year we ended up having our worst weather day on our longest day, which meant colder weather than expected, and some tough head winds – but it is all part of experiencing Newfoundland. The weather can change quickly, and we saw that first hand. I really enjoyed the trip, and would highly recommend it.