Quebec’s Chaudière-Appalaches – it is an area you may not be familiar with.  With its growing network of cycling paths this region is becoming popular for bicycle touring among Quebecois.  Like the Eastern Townships and Saguenay – Lac-Saint-Jean areas before it, this area is increasingly becoming known as a cycling destination beyond the province.

Chaudière-Appalaches lies between Quebec City and the state of Maine.  This is a region that features many cycling paths – part of Quebec’s Route Verte network.  Join us as we connect up these cycling trails – the Parc linéaire le Grand Tronc, Parcours des Anses,  Parc Lineare Lotbiniere, Piste Bicyclable de Thetford Mines, Veloroute de la Chaudiere, Bellechasse, Harlaka, and some other shorter ones in between.  These paths allow us to be free from the stress of automobiles.  They are  amazingly well-constructed facilities, and are almost entirely paved.  They include rest areas, as well as access to the villages along the way.

These are very scenic routes. In fact, one has been selected the best in all of Quebec Les 10 plus belles pistes cyclables du Québec.  Millions of dollars have been invested in the cycling paths of this region.  Just as the Saguenay – Lac-Saint-Jean region has become a major cycling destination as a result of its cycling network, the Chaudiere-Appalaches is now growing in popularity as well.

Becoming a destination among cycling enthusiasts over all of Quebec, we are looking forward to discovering this great region.  This tour will be more than exploring the paths.  We believe in having a mix of both trails and roads.  We will be connecting the path networks with some road biking – across the Quebec countryside, through its attractive villages, and through some forests. 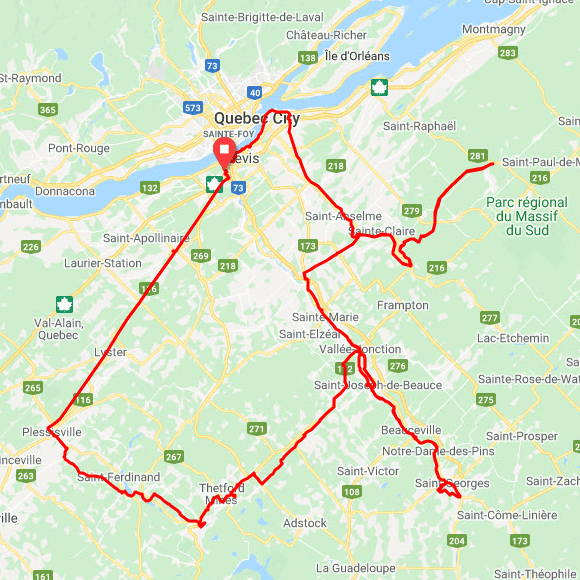 Day 1 – Lévis (Quebec City) to Plessisville  75 km (47 mi.)
We begin just across the Saint Lawrence River from romantic Quebec City.  The city of Lévis is the furthest point north in the Chaudiere-Appalaches region.  A full $8.6 million has been dedicated toward cycling infrastructure on the Levis side.  We will connect to the Lotbinière – also known as the Trans-Canada Trail (Sentier Transcanadien).  We will take it westward for several hours before cycling to our first camp.

We will begin cycling through a rural historic area settled by Irish and British families in the 19th century. Much of the original architecture remains.

The “Bicyclable Thetford Mines” trail winds its way through a rambling collection of old melancholy mining towns.  The mines are now closed, massive rounded hills of tailings, some a century old,  seem to have been dropped onto the landscape from above.  Some are bright silver in appearance.  Giant pits going deep into the earth are scattered about, with the miners’ housing still sitting precariously at the edges.  Stark, desolate, at times a bit eerie, this is certainly a different venue for a cycling path system.

Before meeting the trail we will take a short tour around the original mining area.  Here the original general store built by Irish immigrants may be open to visitors.  We will pass by the old miners lodges, the streetscape chosen for the quintessential French-Canadian movie Mon Oncle Antoine.

St-Alphonse Church, with its Romanesque Revival style, sits in the downtown area of Thetford Mines. It is considered an architectural masterpiece.

Tonight during our stay at Thetford Mines will a stop at Fromagerie La Bourgade – not only is it a fromagerie but a wonderful restaurant!

Day 3 – Thetford Mines to Saint-Joseph 62 km (38 mi.)
Before descending into the Chaudiere Valley, we do some road cycling through beautiful fields of grain, maize, potatoes and hay.   For those who wish to do more, there is a huge hill you can optionally do while exploring Saint-Joseph.

Day 4 – Day Ride of La Chaudiere Cycling Paths  up to 79 km (up to 49 mi.)
We will do the Véloroute de la Chaudière today, heading south to the city of Saint-Georges.  Riders can do part of the route or the full thing as it is our and back. This is the heart of the Chaudiere-Appalaches region (this part also known as the Beauce).  There are a few sections of the city worth exploring.  The city also has its own cycling path system, the Parc des Sept-Chutes, which we will explore before heading back to Saint-Joseph.

Day 5 – Saint-Joseph to Saint-Malachie  64 km (40 mi.)
We cross to another valley and anothen cycling path system. Saint-Malachie is the crossroads of the newly popular cycling area of Bellechasse. We expect to meet  many other cyclists in this area. This will be our tour’s pot-luck supper night.

Day 6 – Day Ride of La Bellechasse Cycling Path  69 km (43 mi.)
We will stay in Saint-Malachie and make a day riding a newer cycling path system – La Bellechasse.  It is a very long path linking Armagh with Saint-Henri-de-Lévis.  A $4 million project for cyclists, it features artwork and 35 panels allowing cyclists to discover more about the former use of this circuit. Railway stations, railway accidents, and even employees of railway companies are in the spotlight on the interpretation tables.

This is an incredibly well done project.  This has become a destination for cycling, spreading in popularity as has the Saguenay – Lac-Saint-Jean  region before it.  Riders can do the full 79 kilometre distance, or just can take it easy and go as far as they wish.

Day 7 – Saint-Malachie to Lévis (Quebec City) 78 km (49 mi.)
We return to Quebec City riding on the the Bellechasse pathway.  It is long for a last day, but there is not much elevation change so riders should sail along.  last Near Levis the Bellechasse connects with the Harlaka Trail and then later the Parcours des Anses to return us to Quebec City.  The Parcours des Anses, edging along the Saint Lawrence and with the Chateau Frontenac across the river as a backdrop, is considered one of the most beautiful cycling paths in North America.  It will lead us to our end point, and farewells.

Good variety with mix of long rides, short rides and off days. Got good value for the cost of the tour.

Campgrounds were good and the food system — which we were hesitant about before the trip, not sure how well it would work — actually was great. Great setup with the dishes and cooking tools, crate and cooler system, and daily grocery pickups.

I rode the whole distance on a wild moose chase.

A great legacy Gary! Memories I will always treasure! See you on down the road…