There will not be any additional runs of this tour.  After 35 fabulous years Atlantic Canada Cycling is winding down. Our events are now a limited time experience.  Our final events are listed here. Read about our final plans here.

It will be a tour of mostly gentle terrain overall. There will be occasional small hills, but we for the most part follow the shoreline of New Brunswick’s famed Saint John River. We begin Quebec, at Rivière-du-Loup on the shore of the Saint-Lawrence River.  Rising up we cross over into the watershed of the Saint John River.

We move further southward, the villages changing from French to English-speaking. A winding route follows the river and its many adjoining bays and lakes. We pass through a series of farming and market towns, some dating from early in Canadian history. We end our journey at the seaport city of Saint John, where the lengthy river we have been following empties with turbulence into the Bay of Fundy. After a night together in the city we then rewind the tour with provided transportation back to Rivière-du-Loup and our farewells.

Atlantic Canada Cycling does not do this tour often.  This event is offered only every few seasons.  It will be a tour of mostly gentle terrain overall. There will be occasional small hills, but we for the most part follow the shoreline of New Brunswick’s famed Saint John River. For more accomplished bicycle tourists, we will have options for longer daily routes, while still enabling them to be part of the group. An enjoyable bicycle camping vacation, it will be a friendly tour, with a great deal of socializing. 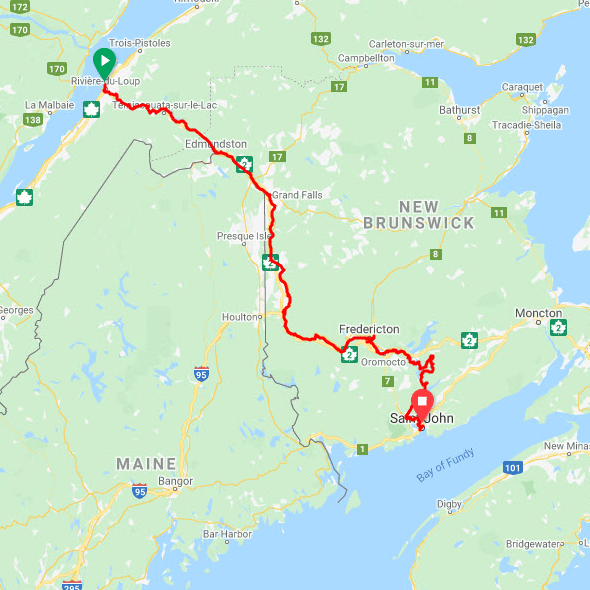 Rivière-du-Loup to Cabano 80 km (50 mi.)
Following an early morning breakfast reception, we begin our tour. We start from one of our favourite towns, Riviere-du-Loup. A short bit away from the Saint Lawrence River, a fantastic cycling path begins, suitable for almost all most bicycles. We ride free of car traffic for the best part of the next two days. Our first night is at a Quebec summer town, Cabano, on a beautiful lake.

Cabano to Edmundston 68 km (42 mi.)
We follow the cycling pathway into New Brunswick.  We enter the north-east corner of New Brunswick.  Known as the “Kingdom of Madawaska” it is a tiny finger of the province, surrounded by Quebec and Maine. Edmundston hss highest percentage of French speakers in Canada outside of Quebec.

Edmundston to Grand Falls 60 km (37 mi.)
With the creation of a newer Trans-Canada Highway, the old road has become bicycle-friendly again.  Way we stop at the town of Grand Falls.

Grand Falls to Clearview 62 km (39 mi.)
Today offers a quiet stretch along two rivers, the St. John, and the Tobique. The area changes here from French to mostly English-speaking. There are additional cycling options as well.

Woodstock to Kingsclear 78 km (49 mi.)
This will be the most quiet day of the tour, we look forward to a peaceful day of cycling. It is fairly easy riding if the wind is on our side. If riders have any energy left there are 5.5 km of hiking trails at the park we will be staying.

Kingsclear to Fredericton 50 km (31mi.)
We emerge from a rural setting to visit Fredericton, New Brunswick’s capital city.  A very pleasant city, Fredericton offers a good stop for activities and some good restaurants. We will cycle some of its bicycle trail system. Stayin gin town, we will meet socialize together at a restauaunt in the evening.Fredericton to Cambridge 94 km (58 mi.)
We leave the city by way of a cycling path.  Once reaching Gagetown we cross the river and then face a few hills.Cambridge to Oak Point 58 km (36 mi.)
Today is the hilliest day of our trip. After another river ferry we head to another nice camp.Oak Point to Saint John 60 km (37 mi.)
Our last day of riding. We take a very roundabout way of avoiding the suburban areas of the city of Saint John. We explore the Kingston Peninsula before heading for our last night’s stopping point. We end our cycling tour at the very end of the St. John River, where the turbulent waters of the river empties into the famed Bay of Fundy. Tonight we will reserve a spot to go out together somewhere in the city with the same name of the river we have been following for a week, for a final celebration of our tour.Return transportation to Riviere-du-Loup
We rewind the tour with transportation back to Riviere-du-Loup, Quebec (included with registration). We arrive in the early afternoon.

What We Provide:
–Comprehensive ride guide; all about what you will experience on route, history, culture, trivia –camping facilities –luggage transfer; we will carry your gear, just bike and enjoy the ride! –bike mechanic assistance –sag wagon service, support vehicle available for breakdowns or drives to shorten your day –daily route maps -tour escort; Gary Conrod will be along the route, he has 190,000 kilometres cycling experience, including many trips and organizing events in New Brunswick;  –return bus and bicycle transportation from tour end point to Rivière-du-Loup.

The Saint John River Bicycle Tour is an affordable, supported cycling trip exploring the longest river in New Brunswick and the Petit-Témis trail in Quebec.

It turned out to be a whole lot of fun. It was a very good chance for me to spend some quality time with my teenage son. Both of us enjoyed getting out to the event.

Gary, thank you so much for your assistance to me during the Gaspé tour. The scenery was so spectacular. It was a mind blowing, often emotional, journey for me in Québec. You all have such a great passion for cycle touring that added to my enjoyment immensely. Encore une fois, je vous remercie pour un parcours inoubliable !

We are all SO glad ACC is still alive and well and ready for future adventures.

The Saguenay – Lac Saint-Jean Tour was outstanding. The other tour members were a highlight for me.