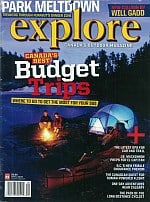 Canada’s Best Budget Trips. Atlantic Canada Cycling’s Cape Breton Island Tour was named one of Explore Magazine’s “Best Where to Go to Get the Most For Your $$$”! – Explore Magazine

Voted one of the best places to ride in North America by Bicycling magazine. Cape Breton Island’s got everything a cyclist could want: quiet roads, one traffic light, epic climbs and descents, and inspiring views from oceanside mountains. And with more than 20 tours of Cape Breton under their belt, Atlantic Canada Cycling has the trip down to a science. Armed with a map, 30 to 50 cyclists guide themselves on day rides. averaging 70 kilometres. while support vans move camp and help out the riders. Everyone travels at their own speed – stopping for a picture every five minutes on the Cabot Trail or hammering along beautiful Bras d’Or Lake-and then the group gets together at night.