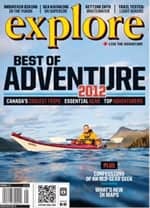 The quiet New Brunswick countryside stars in Atlantic Canada Cycling’s Saint John River Bicycle Tour. The 10-day, 712-kilometre trip follows the broad, historic river all the way through New Brunswick to the Bay of Fundy. Along the route, riders pedal through the heart of the Maritime province, even crossing the world’s longest covered bridge.

The tour actually begins in Quebec’s Rivière-du-Loup, on the south shore of the St. Lawrence River, before heading to Edmundston, a French-speaking city in northern New Brunswick. It’s here that the tour joins the Saint John River and stays close all the way to the ocean. Heading south, the towns change from mostly French-speaking to

English-speaking, and the scenery changes from forest to farms. Daily distances range from an easy 30 kilometres to a hilly 90, though each day offers detours for the more energetic. A support van carries luggage and campsites are reserved, but food is up to you. After the ride ends in Saint John, the van shuttles the riders back to Rivière -du-Loup.  ATLANTICCANADACYCLING.COM