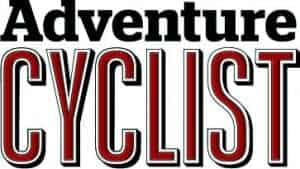 Very few people have ever had a full page devoted to them by Adventure Cycling’s Magazine. Gary Conrod, founder and mainstay of Atlantic Canada Cycling, got an entire page, about his love for cycling, his methods of running bicycle tours.

At first, Gary Conrod might seem an unlikely person to be leading bicycle tours. The lanky Nova Scotian is uncomfortable speaking to a group — “That’s not my style,” says Gary, who much prefers one-on-one and the grapevine to keep the group informed.

And, though it takes more and more of his time each year, he’s reluctant to think of Atlantic Canada Cycling as a business. He doesn’t want it to be like other tour companies, which look at guests as “wallets.”

“I still view it as a giant hobby.” says Conrod. So how did this all get started? One evening I invited Conrod to share some macaroni and cheese at our picnic table and tell us about it.

“I’ve never driven a car.” he began. “We didn’t have one. My mother grew up in Newfoundland without a car, and my father was traumatized by an auto accident when he was a teen and never drove again.”

At 18, Gary got a 10-speed and an odometer for it, and the next day pedaled 80 miles. “The pain was incredible,” he remembered, “but discovering the bike was discovering mobility.”

Routinely, he rode long distances; the world outside Halifax had opened up to him. He joined a bike club in the city. The only teenager in the group, in his youthful enthusiasm he started running the club. In time, he cycletoured in the Maritimes and across Canada and through the United States, as well as in England, Ireland, Holland, Germany and Sweden.

Eventually, he discovered bike rallies. One in Poland (he was invited by a Polish pen-pal) was pivotal. The scenery in Poland, decided Gary, wasn’t nearly as pretty as back home, and nobody was running a rally there.

The following year, 1987, he organized the Atlantic Canada Bicycle Rally in Nova Scotia. People came, and wanted to come back again. Soon, they wanted longer tours, and more tours, and Gary obliged. Meanwhile, he was working as a bike mechanic, and at other short-term jobs to help support a “hobby” that had taken on a life of its own.

How does he manage it? Keeping his events relatively small suits Gary, whose aim is to make the tour feel like a big family ride, with everyone on a first-name basis. Gary’s approach is to let this happen on its own — there is no “Welcome to the tour, let’s everybody introduce ourselves” speech. [ACC Note: there now are J] Neither is there any handholding. Gary expects each participant to arrive with a working, properly fitted bicycle, and to know how to ride it. His tour is relaxed enough to let everyone move at their own pace in the morning; the luggage truck doesn’t leave until 10 a.m. each day.

After a summer of personally leading his events, and several months increasingly filled with organizational work to prepare for the next season, what was he planning for a change of pace? A bike tour, he said, adding that in fall nobody would be calling to ask about the tours. Hitching a ride with a friend, he would take his bike to Guelph, Ontario. There he would continue a series of solo rides around the Great Lakes, this time cycling a loop around Lake Erie, A highlight, he anticipated, would be navigating Detroit, Cleveland and Buffalo. “I love to go to a strange city and figure out how to get through on my bike to the other side.” For Gary, it’s still about discovery.