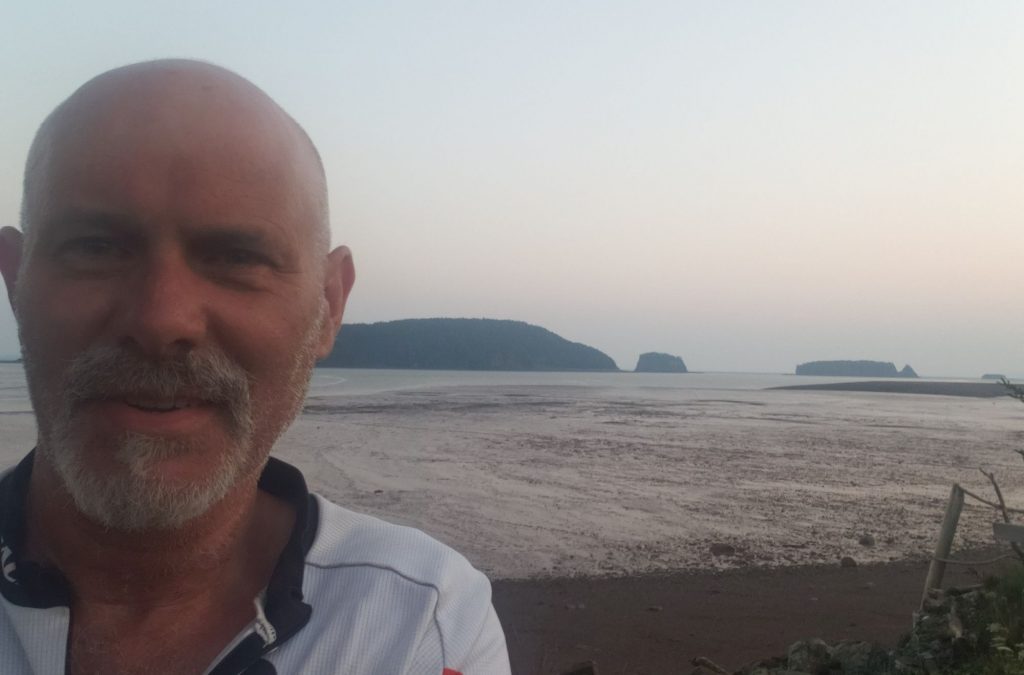 In 1986, Gary Conrod returned from a nine-day bicycle festival in Poland. The only Canadian there, he was invited to the event of 4,400 people from his involvement in recruiting used bicycle parts to be shipped to the then money-strapped Communist-era country. He returned home full of excitement to hold a similar type of gathering back home in Nova Scotia. In 1987, he organized the first Atlantic Canada Bicycle Rally. It turned out to be a many-hundreds of hours project. Extremely well received, Gary was asked to put on tours around the Atlantic Provinces. Atlantic Canada Cycling began.

Growing up in Dartmouth, Nova Scotia, Gary started biking right off, running his first tricycle down to the rims. In his late teens, the big 10-speed boom arrived.  Gary purchased a Monte-Carlo 10-speed (at $140 CDN); in 1974, it was actually a pretty good bike for its time.  Gary would explore all over, riding every day, even during the winter down to -22 Celsius, finding himself exploring every back road and woods path in the entire region. One day Gary noticed an announcement for the founding of a new bicycle club – Velo Halifax. He got involved from its founding. The only young person in the club, as it grew, the dirty work was passed on to Gary – stamping envelopes, stapling newsletters, wandering halls of universities, libraries,  and military facilities posting club schedules.  The club blossomed in the big bike boom of the 1980s. Gary did several stints as Club President and also as Tour Planner. 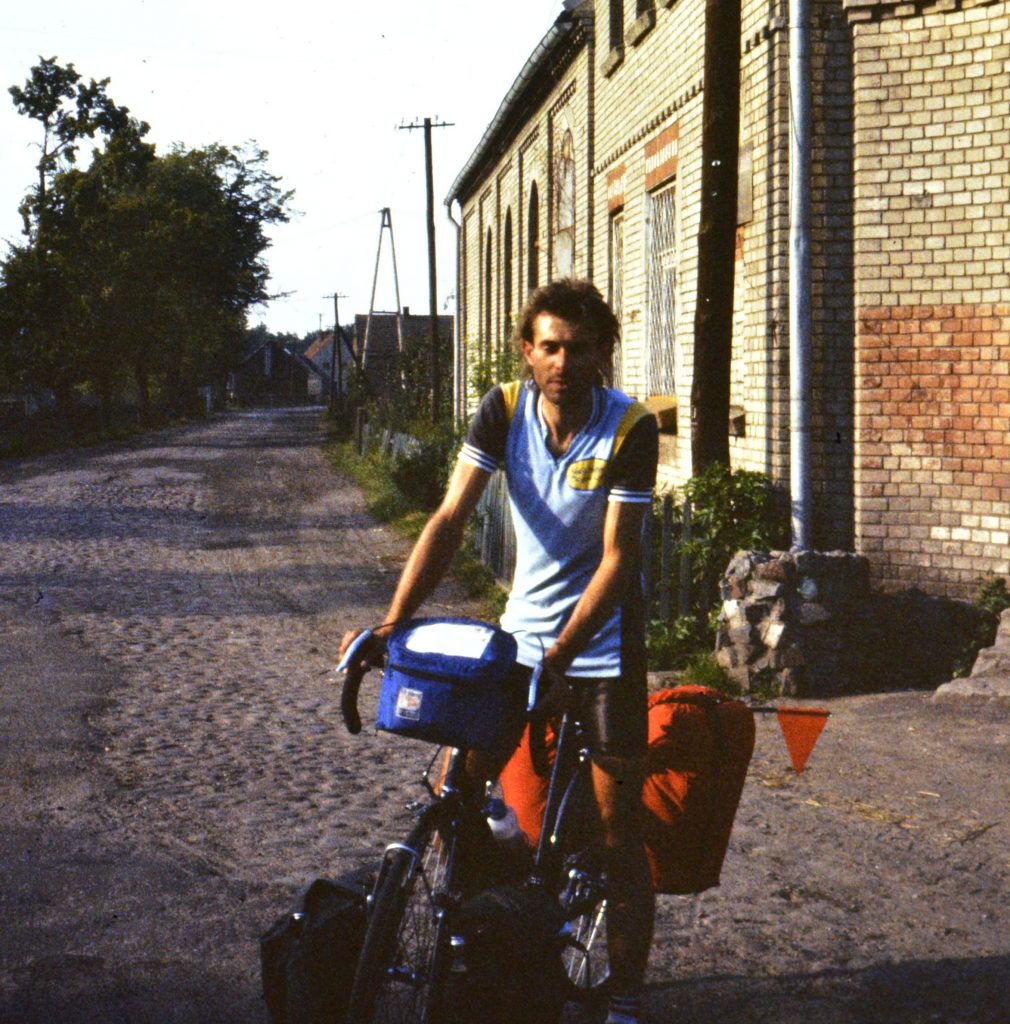 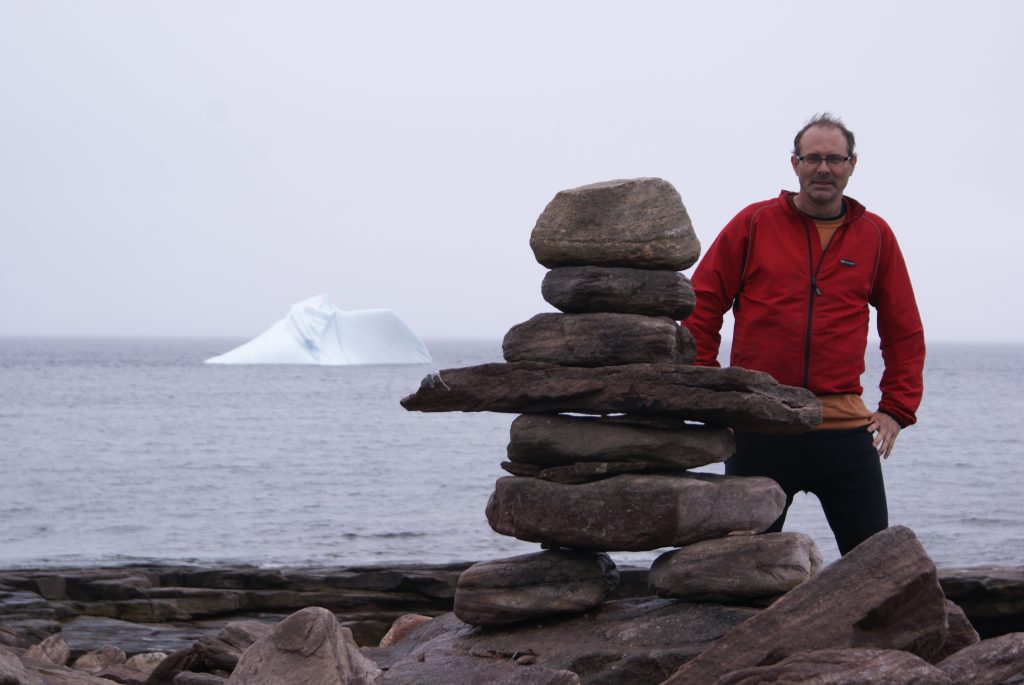 His personal cycling trips increased in length, starting with cycling all over Nova Scotia and Prince Edward Island, leading to a big crossing of Canada in 1976. Just before the arrival in Canada of triple chainrings and cycling shorts, it took Gary all summer (7,000+ kilometres).  From there, cycling became yet even more of an obsession. For Gary, bicycle trips came first, jobs (real life) came second. Stints as library clerk, bicycle mechanic, and even periods as a bicycle messenger fueled his journeys.

Many of his trips were return journeys; time after time he returned to two special places for him – Quebec and Vermont. There were some longer trips, including circling around several of the Great Lakes, to England, around Ireland, many trips to different parts of the U.S.A., two trips cycling in the Netherlands, through Germany, Denmark, Sweden, Norway, and his communist-era ride across Poland.

Early on, Gary was diagnosed with Crohn’s disease.  It all came into place, why he always rode so slow and why it was a late day struggle, cycling with pain and no energy.  He was instructed not to bike, advice which was ignored. Gary learned he had to not follow the crowd and ride at his own speed.  Crohn’s sufferers are almost all introverts. Conversations, bartering, dealing with logistics, and being among groups of people are not easy for the Crohn’s type, yet somehow he found himself running a bicycle touring organization. 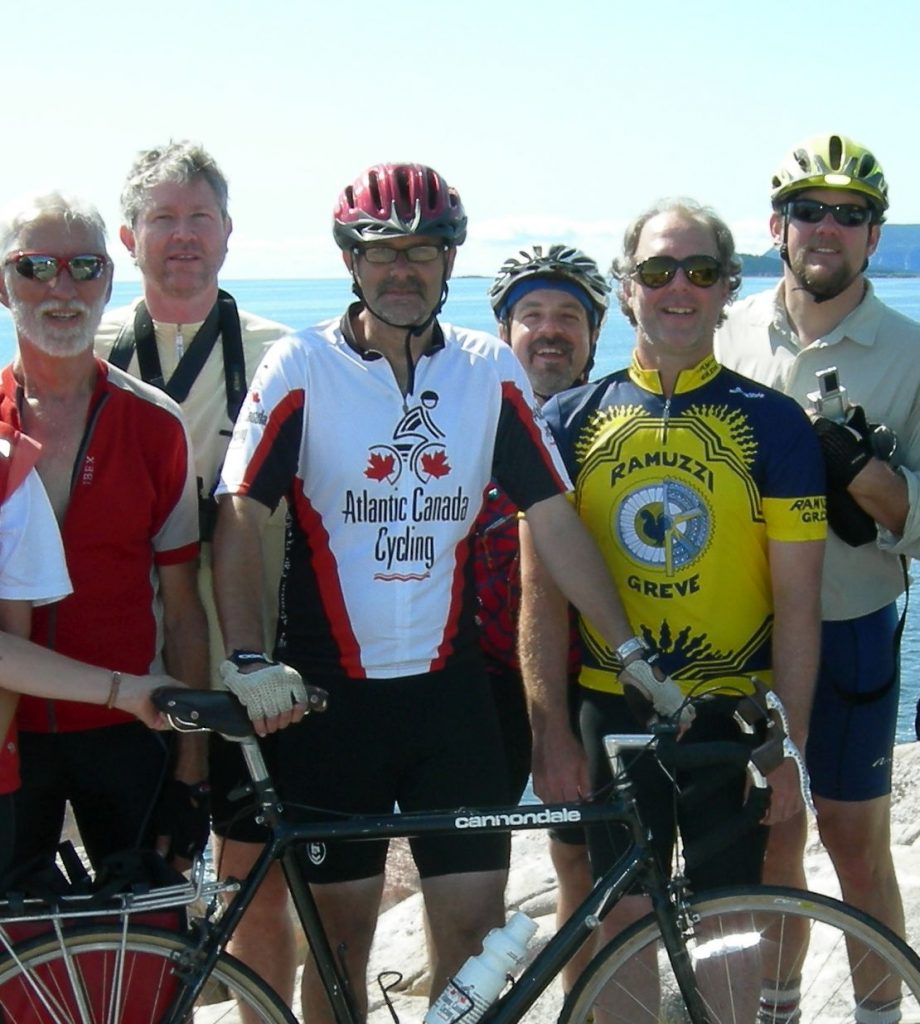 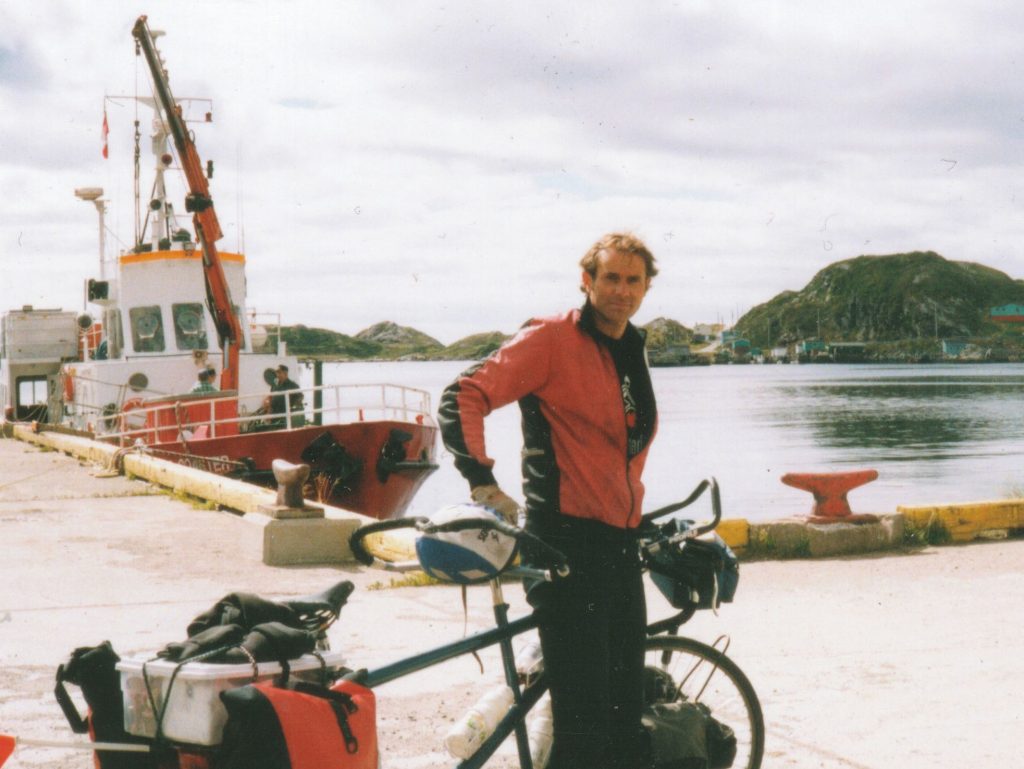 As duties with Atlantic Canada Cycling grew he had to take shorter tours,  such as annual cycling pilgrimages to Quebec. He biked California a few times, North Dakota, Florida, Georgia,  and a place much less warm – up into the frontier-like remoteness of Labrador.  He also did short overseas trips, such as to France, Luxembourg, and Belgium.  Gary was appointed Touring Director with the Provincial sports body Bicycle Nova Scotia and later to the Touring Committee of the Canadian Cycling Association. Pedal Magazine named Gary as Nova Scotia’s Canada Year 150 Cyclist. Gary turned his personal cycling notes into a book on cycling, the “Nova Scotia Bicycle Book”.

From the very first day he bought his first 10-speed, Gary has tracked every kilometer he has biked. Gary has so far logged 192,000 kilometres. He started a participation tracking program for his long time club, Velo Halifax. He is also Atlantic Canada Director for C-KAP (Canadian Kilometre Achiever Program – CKAP).

The pandemic showed us all lessons about our lives. For Gary, it revealed two work-free summers, and the peaceful rewards of exploring on one’s own.  Reaching senior status in 2022, with 35 of his summers busy with Atlantic Canada Cycling, Gary has decided to begin putting on fewer tours and leave more time again for the open road.

He currently lives in Halifax with one wife, two cats, and eight bicycles.  Gary likes to take the long-way round. ..always the scenic route. If there is one less car he will go that way. 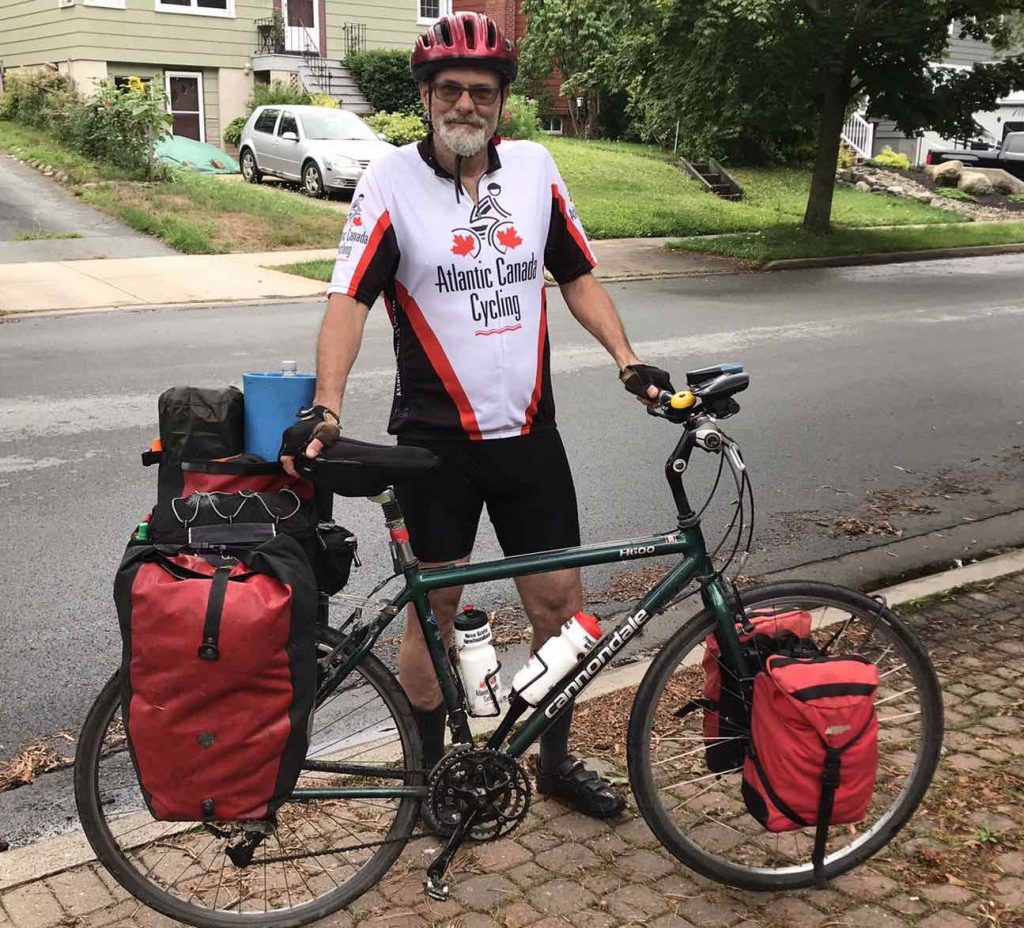 The [Annapolis] Valley is a terrific place to bike – great scenery and variety.

Splendid weekend! Well-conceived and managed. Many Thanks.

Many thanks for the adventure, laughter and fun. Hope to see you next summer.