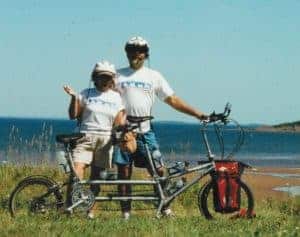 Last winter, I saw an announcement in Bicycle USA for the Atlantic Canada Bicycle Rally, to be held at Riverport, Nova Scotia. Since I had wanted (for reasons still unknown to me) for some time to visit Nova Scotia, and since my tandem partner, Mariana, wanted to undertake a long bicycle vacation, this seemed like the ideal opportunity to fulfill both our wishes. I called her and she immediately agreed.

So it came to be that in the fourth week of July, 1991, we loaded our trusty old Peugeot tandem atop Mariana’s red Saab, along with cycling, camping and boating gear galore, and we set out east from Sacramento to attend a bicycle rally at the opposite end of the continent. Seven days of driving, camping, boating, and sightseeing later, we arrived without mishap at Ovens Natural Park, the seaside campsite for the Rally. The Ovens is named for the small oven-like caves which are to be found in the rocky coastline there, and the site is actually on the opposite side of a large estuary from Riverport. It is a large, lovely, quiet, and beautifully wooded place to camp, and it provided a home base for us and for many of the 300 cyclists attending the Rally. Others stayed at motels, hotels, or bed and breakfast homes nearby.

Many of the riders were from the eastern US, primarily Massachusetts and New York. There were a few from Washington and one each for Arizona and from Texas. Mariana and I were the only rallyists from California, and we were the clear record-holders for distance driven to get there. We were surprised to find only three other tandem teams there (on two Burleys and a Cannondale), since an event like this seems to be perfect for a tandem outing.

The Rally organizers claim that there are “rides for everyone,” and with 13 well-mapped rides from which to choose, we couldn’t find any reason to dispute their claim. We undertook the 45-kilometer ride to Risser’s Beach, involving a ferry ride across the LaHave River, and the 66-kilometer ride to Mahone Bay, where a Wooden Boat Festival was under way, as well as some short rides in and around nearby Lunenburg on our own. Riders were of every age and disposition, and bicycles ranged from the Klein aluminum racer ridden by one young American warrior to the Raleigh Shopper ridden by a charming lady from New Brunswick. We found all riders to be friendly and helpful, without exception. The people of Nova Scotia were marvelous, too. Car-drivers were uniformly polite and conscientious, sometimes to our surprise, accustomed as we are to California drivers.

We took advantage of the optional breakfast/lunch package, so that we had breakfast prepared for us each morning and served cafeteria style “under the big top” tent in the Cyclists’ Village at the Ovens. For the mid-day meal, we took a sack lunch prepared for us by the diligent Food Crew. We enjoyed the steamed mussels at the Rally Picnic and the lobster at the Festival Banquet, as well as all the other fine food available in Nova Scotia.

Field Day at the Ovens was exactly that, with several spontaneous ’teams” of riders engaged in contests of riding skill and derring- do, with prizes for all. The next day was the last day of the Rally, with sad good-byes at the Festival Banquet to fellow rallyists and hearty applause for the Rally organizers. It was also our last night at the Ovens, for the following day was the first day of the Post- Rally tour.

We departed from Lunenburg and rode into the interior of Nova Scotia to stay at Kejimkujik National Park (known locally as the “Keji Park”), then across the province to Annapolis Royal; along the coast of the Bay of Fundy to Victoria Vale. From there we rode to Blomidon for a rest day before continuing on to Aylesford and back to Lunenburg. Daily rides were from 60 kilometers to over 100 kilometers, and all were supported by the sag van and luggage truck, which carried our camping gear. Although Nova Scotia is not particularly mountainous, some of the hills we experienced are quite steep, especially at Blomidon, where almost everyone rode at least part of the way in the van or in the truck.

We provided individually for our own food, so campfire cooking was a nightly event looked forward to, as were the many restaurant and grocery stops. Particularly memorable to us were the ice cream stops and the Chris Brothers ™ pepperoni! The campsites themselves were varied and picturesque, ranging from the densely forested parks at Keji and Blomidon to the pond of water lilies in Sunnyvale Camp, Victoria Vale. The weather ranged from California-like highs in the interior to morning mists and cool offshore breezes at Blomidon. At night, an equally wide-range of weather included a balmy night at Keji to the howling down pour at Blomidon.

The roads were almost all in very good condition, and the traffic density was very light.  Except for three broken spokes (on the freewheel side, of course), our trusty old Peugeot worked perfectly, and we had a wonderful experience in Nova Scotia. The founder/manager of the Rally and Tour, Gary Conrod, and the Food Services Coordinator, Terrie Hardwick, rode the only other tandem, a Cannondale, on the Post-Rally Tour. They also brought along their solo Cannondales to ride occasionally, and I recall noticing the popularity of Cannondale and Trek bicycles in Nova Scotia.

Gary Conrod deserves a lot of credit for conceiving and creating this Rally, and we are looking forward to next year’s event, to be based in Tatamagouche, Nova Scotia.