Cabot Trail – I Should Have Taken My 25 Cog – Andrew Darke

Cabot Trail – I Should Have Taken My 25 Cog – Andrew Darke 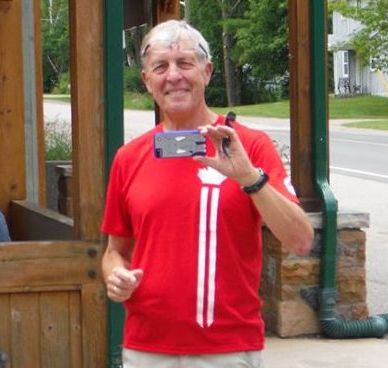 Andrew Darke wrote this for the Newmarket Eagles Cycling Club. He wrote a full article about his attendance on his first Cabot Trail Bicycle Tour.

Cabot Trail I Should Have Taken My 25 Cog
– Andrew Darke

The Cabot Trail is a 300 km road built around the coast of Cape Breton, Nova Scotia and running through Cape Breton Highlands National Park.

I booked a tour through Atlantic Canada Cycling (www.atlanticcanadacycling.com) who, for the princely sum of $105.00 (early bird special) provide 2 dinners, 2 breakfasts, support vehicles and baggage transportation, and a t-shirt. Most people (total 95) camped – I, and two other wimps, took motels.

Day 1 (90K)
Leaving Baddeck (home of Alexander Graham Bell) our first stop after 30 km was the Englishtown ferry crossing of about 100 m (free for bikes) across St-Ann’s Gut (a Gut is like a cove – but smaller).

Lunch/breakfast was taken at the Clucking Hen Cafe who advised that persons in a fowl mood would not be served.

Day 2 (110K)
With much needed fuel breaks, this beast of a stage included two mountain climbs and took me 8.5 hrs and vast quantities of liquid to cope with the amazingly warm temperatures (low 20’s).

The coast road is subject to abrupt changes in elevation and leaving the quaint fishing village of Neil’s Harbour, one such transition had me struggling to find the granny gear only to lock the chain with my feet at 3:00/9:00 o’clock. The consequence was inevitable – a DST (dead slow topple) – fortunately no one saw me – not even the sleepy villagers.

This was followed 20 k later by another 300 m climb up the switchbacks of McKenzie Mountain and then the spectacular 400 m descent of French Mountain into the town of Cheticamp – right on the edge of the gulf of St-Lawrence and in brilliant late afternoon – a memorable experience, indeed.

Day 3 (99K)
Leaving Cheticamp and following the coast road and the Margaree Valley, there was nothing particularly difficult this day and fortunately, the rain held off until about 30 k from journey’s end back at Baddeck.

All in all a tremendous cycling experience and an impressive feat of organization by Gary Conrod and his helpful staff at Atlantic Canada Cycling.