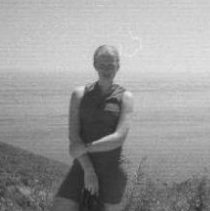 Katrina Schroeder wrote this article when she was just sixteen during her participation on the Cape Breton Island Bicycle Tour.  It was published in the newsletter of the Bombay Bicycle Club in Madison, Wisconsin.

As I crank my legs up the hill on my Trek 1100 road bike, sweat swimming down my face, I ask myself, “Why am I doing this???” Then I glance up and see bald eagles soaring, and look down to find whales playing in the beautiful ocean. These are the memories that I have from biking along the Cabot Trail on Cape Breton Island, Nova Scotia.

There were a total of 23 people on this rather small ride around the Island, but it provided for a close atmosphere where everyone was comfortable talking and socializing with each other. The ride was run by (an operation) called “Atlantic Canada Cycling.” Our trip started in Port Hawkesbury where we had a “party” the night before the ride started. After I got over the shock of how few people there were (I was used to rides with at least a couple hundred people on them), it was fun. With only a couple of people from Canada, the ride was mostly Americans from places like Vermont, Mississippi, and Connecticut. The first two days weren’t bad. There was no food provided (no rest stops), so we got used to stocking up on oak cakes (a Scottish specialty) along the way.

The third day we had a warning as to what would be coming later that week. We went up a mountain called “Kelly’s Mountain.” It wasn’t too bad, and for those of us who hadn’t trained very much, it was good practice. That night we ate a group dinner of mussels and corn, cooked on the beach by Nathan, the guy driving the gear truck. The camp site was right on the ocean, so we had a great view and after dinner a guy named Ray built a bonfire on the rocky beach.

The fourth day we went up Mt. Smoky. There was a great view from the top, as well as a bunch of motorcycle riders who were laughing at me because I was so red and out of breath. I’ve decided now that it was worth it, though at the time I had never climbed anything as hard, and was not sure that I wanted to ever climb something like that again. Lucky for my dad, who wanted to me to stay, it was a long way home. The day after we had a sort of a break day, with only hills, no mountains. But the 6th day was the killer.

The night before the big day one of the riders was reading the preview for the day from a packet we had all received before the ride. Apparently we had all skipped over that page when we decided to sign up! It talked about tough, challenging mountains, three all together. When the day came we were all up and on the road earlier than usual, anticipating the hot long day ahead. It was a physically trying day, but seeing whales and a moose made up for how much my legs hurt that night. The last two days weren’t bad, and when the eight days were over I was glad that I had done all of the climbs, seen all the great wildlife, and met all of the great people whom I hope to keep in touch with.