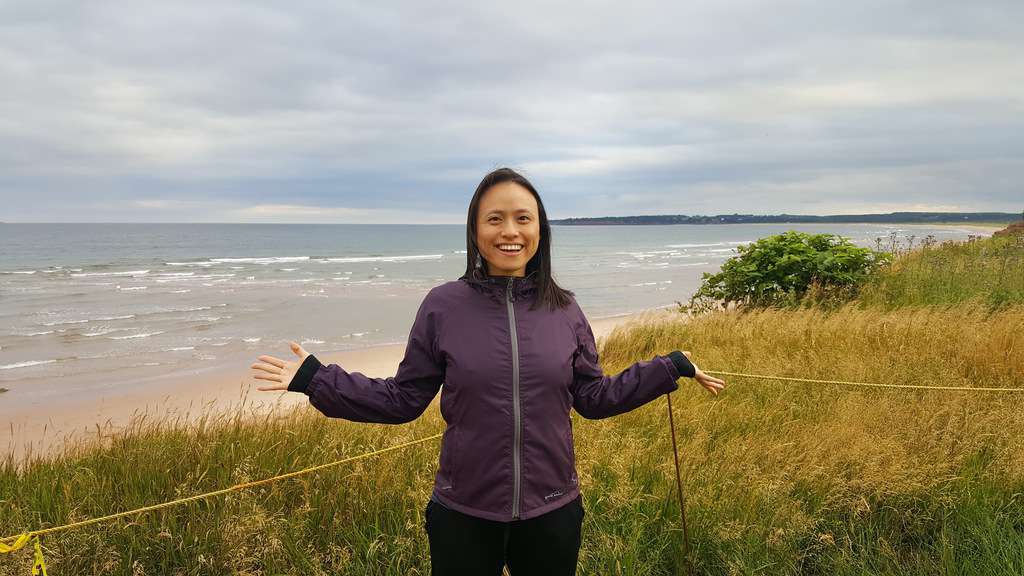 The Prince Edward Island West Bicycle Tour was Hedy Olson’s first ACC bicycle trip. This is her write-up of her tour experiences.

Tour overview: The crew was wonderful! Most tour members are on the older side, which was surprising – perhaps they were surprised at our ages! Some minor mistakes on sheets, usually a misalignment of arrow and L/R words, but navigable. Scenery is beautiful. Prepare for mosquitoes that come out at dusk and last the rest of the night.

Here’s a day by day write up of this tour:

1. Charlottetown-PEI National Park: The majority of this ride is on the Confederation Trail. It is fairly flat, going steadily uphill, then switches to local roads. The fish shack inside the national park was wonderful, with three types of lobster options. We waited 35 minutes to get to the register and 25 minutes to receive food. Worth it. Unsure if going at another time would be better since we rode past the shack at around 2:30pm and the line was large. The campsite was great. The beach right across had a ton of jellyfish in the water, but it was possible to navigate around them.

2. PEI National Park-St. Peter’s: Almost entirely on the Confederation Trail, fairly easy. There is a new fork at Mount Stewart, so make sure that you’re on the right one after the bakery/welcome center stop. Campsite was decent, shower was actually tile, water was lukewarm. Rick’s Fish Shack in St. Peter’s was the best restaurant bar none of the trip. The rope cultured mussels are harvested from the bay right there and was so fresh, even better than the fancy restaurants in Charlottetown. My husband had the salmon and he said it was perfect.

3. St. Peter’s-Red Point: Confederation Trail is an option, but you miss out on coastal rides; although the headwinds we had made this the toughest day. Ate at East Point Lighthouse: supposedly some people had stomach issues from their clam chowder, but I had no problems with it. Food was pirate themed and had some interesting combos. Lighthouse was $6 with a nice view, but very hot at the top. Took pictures of sea lions on the cliffs. Great view at the campsite and could hear the waves lapping. Ed shucked a huge case of oysters.

4. Red Point-Brudenell: Back roads, toughest climbing according to the handout. More importantly, there really is no food besides Souris. We misread the handout to have food at Bridgetown and ended up eating gas station sandwiches at Cardigan. Note that the pub in Cardigan does not open until the evening. If there is ever a day to choose another lodging option, choose it – the Rodd Brudenell River Resort/Chalets are very close. The campsites were swarmed with all types of bugs, and the bathrooms were disgusting. It also had an e.coli warning and was system shocked, so we were handed jugs of water. My husband suffered for the next two days and had to miss the ride. The golf course restaurant, however, was delicious. One of the best seafood chowder I’ve had. There are a lot of water activities available at the campsite, along with rentals.

5. Brudenell-Panmure Island: Because of the pot luck being tonight and the grocery store location early in the ride, we stopped for a bit in Montague. Ate at the Windows on the Water – it was decent. Then, instead of taking the inland country roads, we took the shortcut on 17 along the coast. It was a very pleasant and short ride. The crew brought quahogs and mussels for the pot luck and the whole thing was delicious. Campsite was very nice, close to the water. Took some amazing sunset photos. Beach at the campsite is a tiny inlet; if you walk up the roads a bit, you’ll find a nice food shack and a great beach. They have many flavors of ice cream and the lobster quesadilla was great.

6. Panmure Island-Wood Islands: Fairly easy ride, but confusing as there are multiple places that start with the word Murray. The first town you pass by is Murray River – that is where the Magic Dragon is located, and where the food is located. The second town is Murray Harbour, which has the grocery pickup but not much in terms of food. The ride to and along Cape Bear is very beautiful; however, headwinds made it considerably slower. The guide does note that you can take a shortcut, which is something to think about, considering the Northumberland Provincial Park campsite was amazing. We were located on cliffs with a walkway down to the beach. Could hear the waves and see the Nova Scotia-PEI ferry.

7. Wood Islands-Charlottetown: We took the Confederation Trail today and have many regrets; just stick to the provided routes instead. First, the Confederation Trail isn’t completed even though the 2017 guide makes no mention of this fact, so we spent more time than comfortable cycling with heavy traffic on Trans-Canada 1. Second, the majority of the trail is a slow steady uphill, about 40km, and a large portion of this is completed in loose sand/gravel. Third, there are a lot of flies. At one point, there were 30+ flies following my husband. No food or water options on the trail.