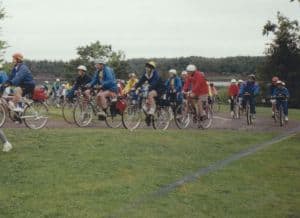 Where the Rubber Meets the Road – In which our writer travels rural Nova Scotia with only two skinny wheels to take her where she’ll go  by Jane Murray August, 1992

Three more days and counting. We would soon be off on the bicycle vacation we had been looking forward to and talking about for months. Talking so much, in fact, that some friends had actually decided to join us.

This is a bicycle rally not just for high-tech cyclists in stretchy shorts and racing gloves, but for regular people, people who ride bikes as opposed to going full tilt for that high-speed experience. People like us: my two children — Joseph, 12, Stephen, 8 and me, whose age is completely irrelevant to this.

We had decided on motel accommodation during -the- three-day event, while other rallyists would be string dormitory style at the Atlantic Christian Training Centre at Tatamagouche, head-quarters for this summer’s Atlantic Canada Bicycle Rally. The real enthusiasts would be camping.

This would be our second ACBR. Last year’s cycling event, out of The Ovens camping area near Lunenburg, was our first rally ever, and we loved it.

As usual, rally manager Gary Conrod had been working on preparations for months. Five times he scouted the territory for people to prepare our meals as well as carefully mapping out routes so that each day would offer cyclists a variety of rides ranging from easy to demanding.

At last the Natal Day long weekend has arrived. Car packed, bikes on our new rack, and it’s time to head for Tatamagouche, a short two-hour drive for us. Others will have travelled thousands of miles to take part in the rally.

Activities traditionally kick off Friday evening with registration and a good meal. This Friday’s culinary offering was incredible—pizza, and interesting additions like corn, cyclists like to load up on high-energy carbohydrates.

Then Saturday morning dawned with moisture in the air that far exceeded a good Nova Scotia fog, or even mist. This was rain by anybody’s standard, falling from a very grey sky. But strangely, as 200 cyclists gathered after breakfast for the rally to begin at the ACTC grounds, not a face in the crowd looked discouraged.

Soon a multitude of cyclists thinned out into one long stream along the road to Tatamagouche, and small groups broke away, following leaders for the various destinations that day. Speedsters shot ahead, while those of us with a more leisurely approach fell to the rear. It didn’t matter. There was plenty of room for us all.

Signs of welcome hung in Tatamagouche shop windows. And as we headed out into the pastoral country-Side, we were greeted by many a friendly wave along the way. It felt so good to be gliding along a scenic rural road with a whole day ahead of us and nothing but ‘More of the same for three more days.

I remember thinking briefly that it did seem odd to see so many people riding their bicycles in the rain, all apparently having a really good time. But that was quickly replaced by enjoyment. The truth is, by the end of the day when the Weather Was fire, f couldn’t remember When the rain had stopped.

According to the laws of averages, some of us are better navigators than others. And our little’ group, merrily cycling along on our own by now, did have some problems following the maps. But happily, it worked to our advantage on the first day, and we managed to take in Balmoral Grist Mill, where we lunched by the picturesque mill pond, and Sutherland Steam Mill, that was just being fired up as we arrived. This, we were told, only happens once a month and we were fascinated to see huge trees being sliced into rough boards at this old mill now maintained by the provincial government.

The other time, we strayed wasn’t quite so opportune and several sweaty kilometers were logged going the wrong way in the heat of the last clay of the rally. We seemed to be out of sync with the rally support vehicles that happened to pass by only when we were doing fine. But what a comfort to know they were out there watching over us.

At the end of each day we all looked, forward to regrouping and sharing experiences with other happily tired cyclists. For us, just riding 35-45 kms in one day and staying awake long enough to talk about it was an accomplishment.

This is an event that attracts enthusiasts from all over North America. Most, whether from New England, North Carolina, Toronto, or even California, were charmed by Nova Scotia’s scenic beauty.

The social side o rally is an, odd mix of activities that somehow mesh together into fun for all. Field Day events on the Saturday evening include tricycle races, an egg-in-the-spoon while riding a bike race, a slow bicycle race won by the last person to cross the finish line, and other unorthodox contests.

And; it should be mentioned, the Sunday Evening banquet and dance, attended by all, was just as offbeat this year as last. A humungus lobster dinner is followed by dancing the night away. While this may not sound like your cup of tea, it’s an experience that should be tried before being discounted. It’s actually a lot of fun.

At the banquet we sat next to Clyde and Ann Gourley from Connecticut. A retired couple, they attend several rallies each year. Clyde owns five bicycles and a van for getting them around.

Ann doesn’t ride, but enjoys seeing new places and is happy her husband has found a hobby he loves while helping his heart condition.

This year’s oldest participant, John Windebank, 79, of Waterside, Nova Scotia, had a wonderful time meeting others who share his interest in cycling. And the youngest was Peter MacDonald, seven, of Bedford, who attended with older brother Andrew 12, and mom and dad, Cathy and Ron.

The MacDonalds, incidentally, are the friends we enticed to attend the rally. And after camping and cycling in the rain, and losing each other at least once along the way, we’ re ‘still friends, All in all the group seemed about as delightfully varied as last year. This, of course, is part of the appeal and a large part of why we’re looking forward to going again next year.